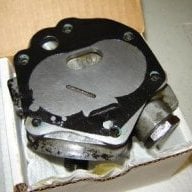 Someone at GM tinkered with the controls on the unboosted 3.8L Buick V6 every year, '81 through '83. The '81 had a 3-solenoid pack on the passenger valve cover, one for charcoal canister purge, one for EFE, one for EGR. The EFE (Early Fuel Evaporation) solenoid operated a butterfly valve between the driver exhaust manifold and the crossover pipe, the butterfly being closed during warmup to divert exhaust through the intake manifold. For '82 the canister purge solenoid was removed, reverting the purge function to pre-computer control. Then for '83 things got more complicated. For the Federal version, the EFE solenoid and butterfly valve were removed in favor of a heater grid under the carburetor. The California version continued to use the 2-solenoid pack and butterfly valve from '82.

I give all this as background for the following. My '83 Malibu has the California version, meaning it's supposed to have the 2-solenoid pack and butterfly valve from '82. And indeed, it does for all the world appear to have that. Except it doesn't. Allow me to explain.

The EGR system is another matter. The EGR valve is the "positive backpressure" type, with an internal air bleed. So the EGR solenoid is not supposed to have an air bleed. But mine does. Beyond that I'm not sure my EGR solenoid is quite working right for what it is, even. With the solenoid "closed" and the air bleed unobstructed it holds no vacuum at all. Plugging the air bleed causes the vacuum to drop slowly like you would expect with a bleed.

So far as I know, my 2-solenoid pack looks just like factory. But clearly it is not. I have no idea who made it. In an attempt to make the car as "normal" as possible, I have swapped the two, EGR to EFE solenoid and vice versa, and disabled the EFE by reversing the check valve that GM conveniently had on it. Once it's warmed up the car drives better than it ever has. When cold it wants to stall at curb idle.

For now that's the best I can do, because these 2-solenoid packs are nowhere to be found. I managed to find one of the '83 Federal version EGR-only solenoids, but it has an air bleed and oddball wiring and of course no provision for EFE.

If I'm still stuck with this motor at smogcheck next year, I'm not sure what to expect. They definitely check the EGR system, but I find conflicting information on whether they are supposed to pay any attention to EFE or not.

I might add, if I do go to smogcheck with it rigged like this and they do flunk me on the visual, I could probably get a waiver from the Referee. But even then. I'd have to go to the Referee every year from then on, to keep the car registered this way with the waiver.

Holy hell, I would eat a bullet.
Expand signature
There is no spoon.
02 Firebird/85 Bonneville Mashup "Lipstick on a Pig"
Reactions: Turbolq4 Makes me glad I live where I do.
Expand signature
Robert

That's what everybody says. I don't know if it helps to keep hearing that or what ....

Kinda makes me feel like I'm in traction in a hospital bed .... So are you wanting to keep that engine or not?

Does your emissions thingy people care what is under the hood of a 36 year old car? It isn't exempt at this point?

Nothing is exempt in Kalifornia!!!!
Expand signature
There is no spoon.
02 Firebird/85 Bonneville Mashup "Lipstick on a Pig"

fleming442 said:
Nothing is exempt in Kalifornia!!!!
Click to expand...

It is just another tax that they don't want to call a tax....our cars are actually "greener" than any new car.....

"Making a new car creates as much carbon pollution as driving it, so it's often better to keep your old banger on the road than to upgrade to a greener model."
Expand signature