The term "speculate" is linguistically related to the process of coughing up phlegm.
Toggle signature
Sigh, no G-body left here. I stalled around too long trying to figure out what I could possibly want to do with my '83 Malibu (Buick V6) that would satisfy the State of California, and it finally flunked smogcheck one too many times for me.
Reactions: 1 users

The LS1 B4C Camaros only got an alternator upgrade from a base-Z28. That's it. They'll do 160mph stock (personal experience). 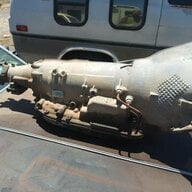 motorheadmike said:
The LS1 B4C Camaros only got an alternator upgrade from a base-Z28. That's it. They'll do 160mph stock (personal experience).

It was a lot of fun to have owned one of those cars. I miss it.
Click to expand...

If the unit was deep cover op, ... OR someone with the purchase authority could get one if approved. Approval takes a different routing. If you think back to that time frame was the change to becoming more "professional" ... Basically a lot of stuff was neutered. So doubtful you had a bunch of GNXs running around. Plus the car stands out.

A lot if things have changed since the 80s and particular to databasing.

Doubtful the GNX had its own NSN (national stocking number), but...., [Automobile, Sedan, Buick], would. Plus most your purchase agents and Auditors would have no clue what a GNX is. Once the item hits the property book, it has a line item and tracked by manufactures serial number, in this case would be the vin number. When the audit is due you fill this out (basically just a check mark) and sign. Your signature states that you actually saw the item and verified the vin and you sign there. If you lie and the item is not found during the property book audit, you are liable.

The beginning of Cannonball Run there's a Pontiac TA chasing the Lambo. So that was CHiPs. In highschool our town got a Z28. Later on at the Dealership I was the main mechanic for the SD, B/W Ford Crown Vic 1984 and 85s..., some Chevy Suburbans. Unmarked Pontiac Bonnevilles. The one Detective had a 85 Pontiac GP Coupe (stock).

I know of one Detective CPD (Chicago), had a built 69 Firebird. South Illinois one department had a 78ish Corvette L88 for their town and running I-57.

Early 70s Illinois State Patrol had the big 4 Door Monaco and Newport. 440 dual Quad 2 speed rear axles... Yes they were fast, those came factory but those were special made for select duty and not the normal car.

During the filming of Blues Brothers movie, I was at the Cal Sag yard and they had acres of the B/W cars sitting for the movie. The basic car was just as in the movie, 440 4 bbl, 727 HD Auto and HD Chassis.

For the SD I worked with, most our Crown Vic were 84/85s, 302/Auto with variable venturi 2bbl, police/taxi fleet from factory.

Later on (1994), the first car I drove was a Ford Fairmont 4 Door light blue, Automatic, Radio Box, 4cyl engine, town's name on the doors and gvmt plates. It had a 12 inch single red "gumball machine" on the roof. I managed to drive it to Indy once or twice with out it falling apart, I think you could out run it with a 10 speed Schwinn. I.E.: "neutered"...

After that we got a 92 and 94 caprice. The 92 was white unmarked and the 94 was the typical black white scheme with the light bar My own car was a stock Red 94 Z26, rear and front strobes and dash laser on the deck, back end looked like a porcupine. You find out in reality communication is key. County and State had Caprice and Crown Vic, Cessna and a helicopter..., And if someone wants to do anything stupid..., all I have to do is call ahead.

I was on signal 10 run South Indiana when someone pulled out in front of me and the Z26 was totaled. From there I picked up a Crown Vic from Ohio Highway Patrol, 72K miles, absolute dynamite car.

As far as 2003 an individual LEO/Agent/EMT..., you can go down to local dealer and buy your own PD Pkg car if you have approval letter on agency letterhead. They will usually call and check with your dept. But if that checks out you can purchase as POV select color other options, etc... But you pay the payments. For the dept I was with, they didn't have a big budget, so they actually encouraged personal purchase. This adds to their fleet without having to cover all the cost. We got 1 tank gas a month and covered under the towns blanket insurance policy when on emergency run.

So I'm sure there are oddball cars out there, it just wouldn't be standard practice.
Show hidden low quality content
You must log in or register to reply here.

CUTLASS Here's a fun article for y'all.