4.hate/5.free with a GT45 turbski... Just clone my Monte (either engine) it is going to be stupid fast.
Click to expand...

I had been kicking around the VS Racing 7875 kit, but definitely gonna dig a little further into yours
Expand signature

Discovered my water line on the pay side of the water meter sprung a leak forcing me to replace the 4' of old line just to have the threads on the union between the meter pipe & CPVC just had to fight the pipe dope 5x's before it sealed. My karma ran over my dogma
Reactions: Streetbu, axisg, Clutch and 1 other person

So, if you recall, I had been having idle and fuel delivery issues with my other "G" vehicle. As of my last episode, I had actually managed to tweak things by using the idle!! and IAC adjustment screws as well as inputting some changes to the maps in an attempt to eliminate stall out due to repeated stop-go-stop-go during commuter traffic. I got close, but.....I thought i had gotten it right, finally but two shutdowns in two weeks convinced me that it was time to revisit the issue again. Convinced all along that fuel delivery has been the culprit, i went after the dFCO settings.

For the acronym disfunctional, the dFCO are the fuel cut off and restart maps and settings. After surfing a OO-tube video that dealt with them specifically, I dived into the hand-held and reduced the cut off setting to 1. You can disable that setting completely by changing it to Zero (Don't forget to send your changes to the ECU or they will not get entered and remembered.) What this change does is to reduce the cut off point which will keep fuel on its way to the injection unit, even under stop-go-stop-go operating conditions. I also raised the temperature from the default 68 to 250. i run a 185/190 thermostat so having the temp setting higher than the 'stat allows the ECU to work with the temp sensor and use its input correctly. Ran it today on a brief commuter run there, stop, return and it seemed to be happy with what I had done. Going to have to drive it now for a while to see if it stays happy. As a further upgrade to the fuel delivery system I do have an in-tank style electric fuel pump on order that will be getting installed in a brand new tank. This is a pain since the tank in the van is only a few years old but it is safer because there are no fumes to contend with while trying to drill the access hole in the tank top. Oh, yeah, you can attach a hose to the exhaust pipe of another of your vehicles and, with it running, send the exhaust fumes into the tank to create a gas barrier while the cutting is going on....just never quite trusted that suggestion and I like my body parts to be and stay where they currently reside.

My second, and a totally non-G project, is the replacement of the outer and most of the inner rocker panel, plus the cab corner, on my 03 S-10. This is equal parts fabrication and prefab as the inner rocker panel has to be scratch made from sheet metal whereas the outer panel can be bought pre-stamped, as can the cab corner. The local uncivil service is experimenting with a liquid version of salt for winter roads and the stuff is even more corrosive than its solid crystal counterpart. Apart from adding a few more holes to the inner panel, it is about ready to be migged in. Lots of plug or rose welds rather than continuous beads made up of tacks added to tacks. I have an air punch for the holes so that eliminates some of the labor of making them. Had to drill them by hand in the first of the floor panels that I put in the Monte; air is faster and cleaner. The plan is to tack the inner panel in place and then test fit the outer to see how they get along. Expecting to do some panel tweaking with various body hammers. NO pics for this one; there is no safe place for a camera while this type of exercise is going on and this is not being done as a how to piece for a magazine--anyone remember what one of them used to look like??

Just an additional note of explanation here. When I made mention to temperature, the reference being made was to the dFCO Enable Temperature Setting. Summarily the temperature value entered under this category sets the degree of heat that has to exist in the motor before the computer can activate the cut off programming. The default value as set at the factory is 68 degrees, which means that the dFCO routine can function even though the motor is still warming up. A lot of driving is short distance, stop and go, and offers little time for the motor to completely warm up to operating temperature. For myself I won't even try to move the van until it hits a 100 degrees on the water temp gauge, just to make sure that there is sufficient engine heat already in the motor to compensate for the short distances I normally drive in a day.

So, to overcome or "spoof" the programming into delaying the point at which the dFCO will actuate, all that is necessary is to erase the existing default setting of 68 degrees and substitute a higher one. The max possible value is noted in the sidebar as being 298 degrees; I went with 250. Pure water boils at 212 degrees F., 50/50 water/antifreeze premix at a still higher point. That in mind, and I do run antifreeze, I elected to go with the 250 value. High enough that the actual temp will never get there; (if it ever did, there would be a mechanical reason for it like a blown head gasket or gutted radiator or frozen thermostat or??) but still in the realm of reasonable with room for a still higher value if ever needed.

And, as i said before, now I get to drive it for a while once more, as a way to observe the results of my tweaks. Most tuners will limit the changes they make to one or two at a time in order to be able to remember what they did if they have to revisit the work and re-tweak it some more. Anyone in true love with a Holley knows that drill. (Must remember to throw a cover over my old one to keep the dust out more or less).

Oh, yeah, on the acronym thing, the "d" in dFCO stands for "deceleration", as in deceleration Fuel Cut Off, their acronym, not mine. 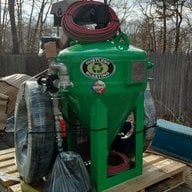 So I went to NJDMV today in case you're wondering this is how it works. You go in the morning and get a number on the back of your ticket will be a time to return to do whatever you need to. Unfortunately they give a limited number of tickets!! I couldn't get one. The state police outside told me they ran out before 7:00 this morning. DMV don't open until 8:00. He said people start getting in line at 11:00 at night! By 5:00am there's a line around the building! Today they were out of tickets before 7:00 let that sink in a minute. So I guess I'm going to have to sleep on the DMV sidewalk to register and title my truck! Or just keep riding dirty, I gotta go to work soooo...
Reactions: Texas82GP, 5spdCab, fleming442 and 2 others Injectedcutty said:
down close to the golf course looking up.
Click to expand...

You live by a golf course!!!

Please tell me you at least yell FOUR at passing golfers!
Expand signature
P'Blaster & Antiseize are my two best friends!

You live by a golf course!!!

Please tell me you at least yell FOUR at passing golfers!
Click to expand...

Yeah, our house sits next to the 18th tee of a public course. I've been golfing since I was 3 or 4, so etiquette won't allow me to yell FORE lol. I do occasionally walk out and collect stray golf balls though. View from the kitchen.... Injectedcutty said:
allow me to yell FORE
Click to expand...

I don't like golf anyways! I just got drunk and drove the cart into sandtraps!

Clutch said:
So I went to NJDMV today in case you're wondering this is how it works. You go in the morning and get a number on the back of your ticket will be a time to return to do whatever you need to. Unfortunately they give a limited number of tickets!! I couldn't get one. The state police outside told me they ran out before 7:00 this morning. DMV don't open until 8:00. He said people start getting in line at 11:00 at night! By 5:00am there's a line around the building! Today they were out of tickets before 7:00 let that sink in a minute. So I guess I'm going to have to sleep on the DMV sidewalk to register and title my truck! Or just keep riding dirty, I gotta go to work soooo...
Click to expand...

I make grave mistakes all the time! Everything seems to work out...​
Reactions: Rktpwrd and fleming442
Show hidden low quality content
You must log in or register to reply here.
Similar threads
442 What dumb s**t did I do to my car today?? Running hot??
Who Did That
Did I screw up my heads???
Jealous Mechanic Did THIS:
Share:
Facebook Twitter Reddit Pinterest Tumblr WhatsApp Email Link