Consolidated all the debris into one spot on the floor and used a brush and pan to retrieve it and dump it in the trash bag. Added the contents of my used shop towel box to the mix and put that back in its place. Tomorrow it will be grass cuttings and ex-weeds, Thursday it will be the household bag and out to the curb it will all go. Local ordinance demands a two bag max so being creative sometimes becomes necessary. It is also Blue Bag or recycling day so all the cardboard and glass/plastic/cans etc., will get turfed out to be squashed and turned into Pruises. Hey, you didn't think they actually had anything that could lay claim to being structurally useful in them, did you?

Made some dollies to help get these beasts mobile for the move. I make grave mistakes all the time! Everything seems to work out...​
Reactions: 8 users 86LK said:
picked these up for more vertical storage in the garage. they're not quite the quality of the Costco Trinity but they hold almost as much weight (132 vs 160lbs on casters) per shelf and I'm not throwing engines on them. they are currently $89 vs $109 for the Costco. and you get 5 shelfs instead of 4. ....and then I took them back 2 days later because the manufacturing quality is garbage

ended up buying the Trinity HEAVY DUTY version on sale from Tractor Supply for $160+tax. 1000 lbs on casters, 5000 on ground
Reactions: 1 user 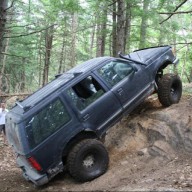 Some more progress on the shop. Will be nice to get this finished so I can actually start on my car.

First, some supplemental inspection had to take place. Haven't received the official report yet, but the inspector didn't crap all over it, so I think I'm good. Contractor came back to do the exterior insulation and backfill. Was a bit of confusion as he though I was supposed to supply the insulation, I pointed out to him that the contract stated that he was to supply and install the foundation as per the drawings, the insulation is included in the drawings and since it's not specifically excluded it's part of the contract. He's a pretty good guy and didn't really complain, but I'm guessing he'll be more specific on that point in the future. Saturday was able to get the grade up to the edge of the slab so I could get up there with the tractor. Don't have a ton of photos of the process, but I had preassembled these columns on the ground. Front end loader of my tractor can't reach anywhere high enough to stand these up, so I had made a simple frame and using a 2000 lbs winch we were able to stand these up without too much drama. Getting one of the girts and cable braces in place. Gotta love engineers sometimes. foundation spec calls for 5-6" of protrusion on the anchor rods which make getting the bolts in place a real pain. I'm hesitant to trim these off before they're inspected. Once that's done I'll trim these off to a more reasonable height. So that's what we were able to get accomplished Sunday. Set those 4 columns, install the girts and cable braces and then plumbing and sqauring these two section. this part of the building is considered to be a 'braced bay' Ensuring that this is all plumb and square will make installing the additional column and walls a much easier process. the challenging part is going to be putting up the rafter. It's 40' out to out so each rafter is about 20' long with a similar angled plate connecting them in the middle. So it might be a bit challenging to get those up there. Feels good though to have actually started building this thing.
Reactions: 12 users
S

I began to clean before winter project time. I make grave mistakes all the time! Everything seems to work out...​
Reactions: 1 users

Posted a little on this a couple days ago in my Juggernaut build thread, but this Thanksgiving weekend I’ve been working on refinishing the floor in the Rktpwrd Skunkworks.

Project Olds Cool is now in storage in the neighbor’s garage across the alley, so I finally have room to do this. Needless to say, the floor was filthy and no amount of cleaning with a regular mop and bucket was gonna cut it. Brought home a positively ancient floor scrubber from work, and got down and dirty cleaning up. Pun fully intended. I’ve got the first coat of sealer on the one side now, and am currently waiting for it to dry. Next is a couple coats of floor polish, then once that’s dry I can move The Juggernaut back over and repeat the sealing/polish process on the other side.

A bit of work to be sure, but also definitely worth it. those grips made me think it's a Hutchins sander..
Reactions: 1 user

melloelky said:
those grips made me think it's a Hutchins sander..
Click to expand...