Good car(s) for a high schooler in a hick town? Expand signature
Uninstall 2020, it is infected with a bad virus
Reactions: 83beater, Rktpwrd, TURNA and 1 other person

pontiacgp said:
is there a need for you to show that picture when many of us are dealing with a snowstorm in subzero weather?
Click to expand...

Didn't think of it that way - If it makes you feel any better that was at Mid Michigan last summer(my avatar). Not much warmer here !

lilbowtie said:
Didn't think of it that way - If it makes you feel any better that was at Mid Michigan last summer(my avatar). Not much warmer here !
Click to expand...

I never wish the same harsh climate on anyone and I'm frustrated now cause the boiler broke down in my igloo but I think help is on it's way..

Expand signature
Uninstall 2020, it is infected with a bad virus
Reactions: fleming442 Lol. It's been 80+ *F here in Miami. I was sweating and getting sunburnt working on my Cutlass today. South California was too cold for my taste. I did a year in Chicago, I'll die before I go back. Haha.
Expand signature
1986 Oldsmobile Cutlass - 350 sbc, TH350 auto, posi rear, Quick Fuel Slayer 600.
Reactions: 307 Regal ticketsspek said:
Well, alright, but I don't necessarily want to be another hick in a sea of them, but I suppose I'm willing to compromise
Click to expand...

Don't worry about looking like a hick. It's all in the execution. Keep it as clean as you can, and just give it the right set of wheels and stance. Maybe just the right stickers in the windows. And don't hack the exhaust off. It'll just be louder when you don't want it to be. But by all means feel free to check out milder mufflers if you want an other-than-stock tone.

Both of the cars you're looking at are old, and both of them (especially at that price point) are going to need some work. And they'll continue to need work. And (insurance) money. Which could instead go into the primary car. Now far be it from me to stop you, but high school can be a good time to save up more cash and really plan ahead to make sure your next big move is a solid one. Get by with what you need until you know for sure what you really want. Personally, I didn't do that right. lol

As far as your original question, I think the S10 would make the better highway beater. It'll more than likely have an overdrive transmission with a more fuel efficient engine. Both cars will probably have 15 inch wheels with tall tire sidewalls which will help with bumps. But there again both cars will probably have worn-out suspension and steering components and you'll wanna take a good look at them before driving them on the highway daily. Don't underestimate rust. Take a good look at the brake lines. On the Cutlass, take a good look at the rear frame rails and expect serious rust on the roof if it has a vinyl top. Those tops hold water when they get old. You'll need your welder.
Expand signature
N/A T-Package '87 Regal (Y56 code, Y code 307) AutoX Cruiser
'76 Buick "355ci/5.8L" V8 / ~216 RWHP / ~250 FT/LB TQ
Racing on All-Seasons is like running in flip-flops. I'm kinda split on this one.... it's been a looong time since I was looking through 16 yr old eyes for a 1st car, and even back then, I didn't really want the same box everyone had.... I also still remember a couple of the cars that I still wish I'd bought (great grandma's 57 post belair, 74 coupe d'eville.).... there is alot to say about getting something that will be less likely to nickel and dime you to death though.....

I'd say, take a good hard look at both, assess what they need, and remember, like alot of others have said, junkyards are full of s-10's and few G-bodies......
Expand signature
"A true soldier fights not because he hates what is in front of him, but because he loves what is behind him" G.K. Chesterson ticketsspek said:
Hello everyone! I'm wondering, should I buy a 94 S-10, or an 85 Olds Cutlass Supreme as a secondary car. Both are about $1200, but the S-10 is in town, but I wouldn't mind driving an hour to get the Cutlass. I'm aware that a lot of the rubber parts on both, such as vacuum lines and weather seals may have cracked, but I'll put the money into either of them. Both of them also look like they've been sitting for a long while, and that may cause some rust problems. But I could probably bring either of them into my welding class and get them fixed. I don't know the mileage on either of them, but they're (hopefully) low. But as some general questions, which one is a better highway beater, because ND has more miles of highway than things to do. I don't really care too much about cargo and people capacity, I'm only driving one other person at most. I already have a pretty good idea of what work I'll have to put into them. So I may as well try to make a deal with the owners. 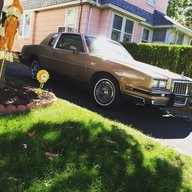 What ever you decide, post pictures and enjoy the crap out of it!!!!!!!!!!!!!!!!!!!!
Expand signature
"Attitude is a little thing that makes a BIG difference"
Reactions: 307 Regal and 83beater
Show hidden low quality content