Well, its been a few months since my last post so I figured it was time for an update.
Pretty sure I mentioned taking the motor back out of the wagon in another thread. Its still on the stand due to a couple of issues that I had. Bought a new timing chain cover, got that problem solved. The second thing was my fault. When I first got the crate motor I swapped out the chrome timing cover for a painted one. I used Duplicolor gloss black on the cover, oil pan and block. Prepped them all like everything else Ive ever painted. When I put the oil pan on the paint around the bolt holes started to pop. Flaked right off of the flange AND the metal strip. Didnt know why it happened but it always bugged me since I couldnt really touch it up correctly. It sucked because the rest of the pan looked perfect.
Since the motor was on the stand and I had the pan off I figured I'd strip it, shoot it with epoxy primer and spray it again. It didnt go quite as planned. I tried to sand the paint off and it wasnt going well. By hand or using a DA, Tried some paint stripper. Two coats and it was still barely coming off. So I get the brilliant idea to tape off the bottom and throw it in my neighbors sandblasting cabinet. It took over 40 minutes to strip that thing. I dont know what they used on it from the factory but that crap was on there. Made me wonder how it came off the flange so easily.
So I have it down to fresh steel. Take it home, throw it on the bench and start to pull the heavy plastic and duct tape off. Ive blasted more parts than I could count over the years. I dont know why but this time I guess I didnt mask it off right. As soon as I pulled it apart I could see the grit inside the pan. It was EVERYWHERE. Not only that but there was oil that ran out of the baffle and of course the grit was stuck it it. I thought i had it pretty clean but I should have tried to clean inside of the baffle. I tried to flush the pan out multiple times. Wax and grease remover, thinner, gas, Simple Green and water. NOTHING would get the grit out of that pan. As soon as I stuck my finger into the holes on the baffle I could feel grit. I was kinda pissed. In the end I wound up buying a new oil pan from Chevy. $137 shipped to my door. A lesson learned.

Now everythings back together. Stripped the two reinforcement bars. Self etching primer. Painted everything again and this time no issues. So while its on the stand I figured I'd tackle the plug wire situation. I picked up a bunch of GM brackets at the local junkyard. I always liked the way the plug wires were routed from the factory. Along the valve covers and wrapped around the back.
I went through a ton of Chevy trucks and vans with center bolt covers. The owner of the yard didnt even charge me for everything I grabbed. I used the brackets that bolt up to the back of the heads. I cut the upper sections off with a cutoff wheel. Shaped them so they look almost factory. Blasted, primed and Hot Rod black.
For the sides Im using the rear brackets that were along the valve covers bolted to the block. The right side brackets are a 1/2" shorter than the left for some reason. It was like that on every motor so I guess thats just the way theyre made. Once theyre finished I dont think its going to be a big deal. I had to cut the crap out of the front brackets so they would clear the header flanges. Im also on the fence about the separators that I have on the lower tab. It keeps the wires locked in but I dont have anything for the back wires so Im not sure if Im not sure if Im leaving them on. I might come up with a different idea for the rears.
I primed the brackets last night and Im painting them this morning. I still have to trim the wires but I want to see which company out there makes double crimp ends for an HEI.
I think they'll look pretty good when everythings finished.

While the motors out of the car Im also taking the wiper arms out and repainting them Eastwood Silver Cad instead of the low gloss black that I used the first time.
It never stops. LOL
Reactions: Longroof79, liquidh8, fleming442 and 2 others 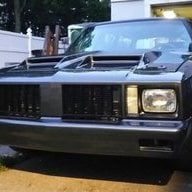 liquidh8 said:
I'm a huge fan of the oem plug wire holders. Used them on my small and big blocks
Click to expand...

Jim, what vehicles did you find them on ? I searched through a ton CK series trucks and late 80s vans. One thing I found was all of the right front brackets had the dipstick tubes attached to them. The other thing was the left side brackets are a bit taller than the right. Ive got another thread that I posted last night that shows the almost finished setup. Do yours look like that ? Take a quick look.

mikester said:
Jim, what vehicles did you find them on ? I searched through a ton CK series trucks and late 80s vans. One thing I found was all of the right front brackets had the dipstick tubes attached to them. The other thing was the left side brackets are a bit taller than the right. Ive got another thread that I posted last night that shows the almost finished setup. Do yours look like that ? Take a quick look.
Click to expand...

liquidh8 said:
Mitch, I'd have to hit storage. If I recall, the sbc was from the c/k, though I was buying them new fron scoggin dickey, same with the bbc.
Click to expand...

Thanks Jim ! I might hit up another yard tomorrow that has a bunch of trucks. The CK series are getting harder to find these days.
I like the brackets on the back of the heads but I might look for a few more that mount on the sides.
Do you remember if you used the separators on the front like I used or did you cut the tabs off ? Im on the fence.
Show hidden low quality content
You must log in or register to reply here.

My 86' Regal project then and now.

The Good the bad and the ugly